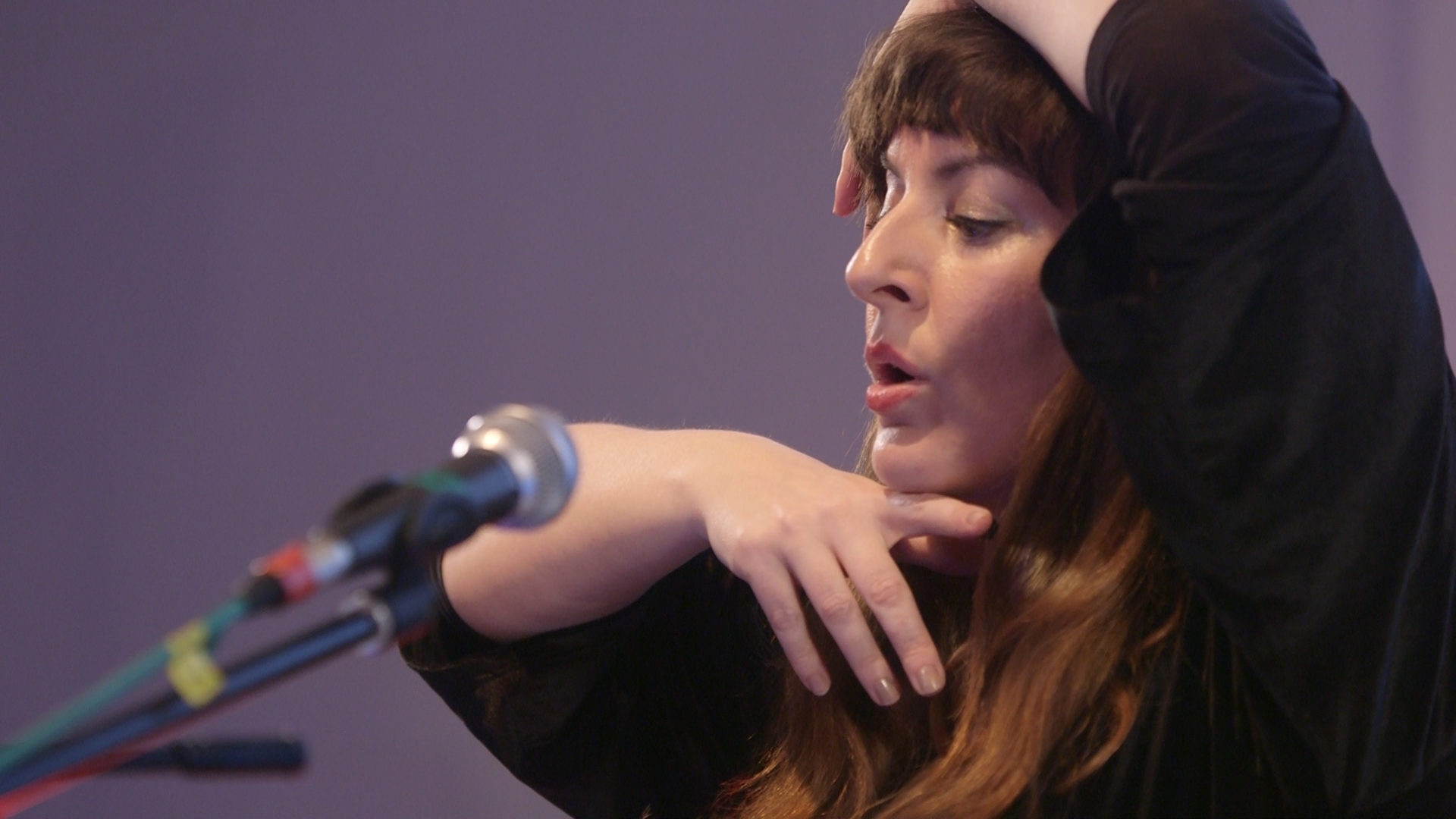 Ingrid Plum is a singer and sound artist. She uses her voice with extended technique, improvisation, field recordings and electronics, to create layered soundscapes, spoken word and songs. She has released several recordings and projects on her own label Plum Records, including ‘Plangent’ her debut album. Her music has been described by The Guardian as “gorgeously atmospheric vocal techniques woven around field recordings & electronics”. Ingrid has performed and exhibited internationally since 2002, creating work that combines Folk Music, Contemporary Classical Music and Sound Art with a healthy dose of singing and exploration.

Vocal wanderings through landscape recordings of natural and man-made environments shaped into songs, soundscapes, films and flights of fancy.

Your music often explores the boundaries of the voice and plays with extended vocal techniques – when did you first start singing, and what inspired you to push the voice in different directions?

I don’t remember beginning to sing because it was when I was so young that I wasn’t forming memories yet. I remember being taken out of the kindergarten into the primary school playground by the ‘older kids’ because they wanted to hear me sing and realising it was something I could do. I started performing public concerts aged 7 and told my family I was going to be a singer. I trained classically because that was the only vocal training available back then, and by the time I was 12 I sang soprano, alto and tenor, but as I got older I felt I didn’t fit into the classical mould. Training to sing classically is like training to be a ballet dancer, your body and technique are shaped to one purpose. I come from a family with a lineage of multiple emigrations and many nationalities, so it made sense to explore vocal techniques from around the world. I travelled and learnt yoiking, overtoning and a lot of techniques that demanded I restructure my muscle use and my thinking about the voice. I also trained in the contemporary techniques that had emerged as a different school of vocal techniques.

I’ve always kept the playful experiments with the voice that you begin as a child, and I found that singing within one genre or style of technique was too restrictive. Folk singing and free improvisation offered the most freedom in terms of technique and style, so after some years of collaborating I recorded my first studio album in 2015 ‘Plangent’. For ‘Plangent’ I wove together the different elements of extended technique in voice, field recordings and folk songwriting to create my own atmospheric sound. I used the album as a chance to compose demanding pieces for my vocal range and use a variety of vocal and production techniques. For the following few years I performed semi-improvised sets that combined ‘Plangent’ with field recordings made in each performance location, and new spoken word and extended technique pieces to keep pushing myself. Then I was asked to work with vocal scores by Alvin Lucier and John Cage. I realised that to really explore everything I could do vocally, I needed to go to musical places beyond where my own mind would take me. I also studied with Meredith Monk who was incredibly supportive and generous with her advice. Studying with her made me push myself further, ask for funding for larger scale works and question ideas around vocal notation and who gets to be a composer. So in 2018 I commissioned 14 scores in any style of notation for ‘Taut‘, which I performed in one long concert and which is available as a live album and book of scores and interviews. ‘Taut’ really took me out of my comfort zone in the best possible way.

How do you approach making a new piece of music?

Quite often I’m led by a sense of place or space that I’ve been invited to work with, and begin by untangling various narratives about the space while simultaneously recording my sensory responses to the intangible elements and atmosphere. I’m always trying to combine different elements, very much in the scientific experimental approach to see what the sum of the parts might be, given different ingredients. So I might combine folk songwriting with field recordings and improvisation, video with live soundtracking and spatialisation, or strip it back to voice and see how long I can sustain the connection with the audience with one sound source. Within that there is the consistent, primal desire to connect with others through my voice. It can be so raw and risky, and I enjoy breaking traditional rules about technique to explore vulnerability on stage. I love the feeling of jumping out of a plane without a parachute that trying something new or improvising live can give me, although the stage is really my safe space, it’s been the one constant in my life. I also love to be able to vary the nuance of any piece depending on the feeling I get about the space I’m performing in, and the audience I’m connecting with. So my approach is really based on my reluctance for repetition and my desire to be always learning. I usually take time to visualise the work before I begin, then I allow myself to be taken on a journey that could go somewhere new whilst honouring the concept or story central to the work. When I’m collaborating with someone I just try to arrive ready to try anything, to go anywhere musically, and be as open as possible to the experience.

Are there any singers and/or composers who have influenced your work?

To be honest I find the most creative inspiration from other sources, such as ideas in literature, science and art. I take inspiration like a magpie building a shiny, weird nest from many different things I like the look of. There are several singers who inspire me by reminding me of the scope of what can be achieved and how much more I can push myself such as Tanya Tagaq and Joan LaBarbara. And there are composers who inspire me to stick to my guns and keep making work like Annea Lockwood, Hildergaard Westerkamp, Björk, Jim O’Rourke and of course Meredith Monk. Recently I’ve been really moved by the work of Caroline Shaw, Roomful Of Teeth and Angharad Davies.

How did you come to study with Meredith Monk, and what was the experience like?

2016 was a strange year for me, I started with a lot of plans and then my apartment got flooded. So I spent the year living out of bags, gigging and just coping as opposed to pushing myself creatively… I got asked to perform with Lou Reed’s Drones installation by Laurie Anderson‘s team and met Laurie, which made me look up from the minutiae of life and remember how much bigger music is. Then towards the end of the year I decided to turn it around and told myself: “This is not my story for this year”. I did a crowdfunder to go and study with Meredith, and I’m incredibly grateful to the 40 people who got me over there. She is amazing and very generous as a teacher and as a performer, and I learnt so much. She was so supportive and encouraged me to ask for funding, and afterwards she even wanted a copy of ‘Taut’ as part of her archive.

The Wellcome Trust exhibition This Is A Voice a few years ago really established for me that we’re at a unique juncture in time where anatomy awareness, vocal technique and cross-cultural exchange of information are influencing each other and progressing interdependent fields of research faster than ever before.

Likewise, it’s an incredible time for vocal artists combining different genres and disciplines. When I started combining field recordings with voice and mixing up genres, most people just didn’t have any reference points to book me with similar acts, and now we have entire events dedicated to it.

I recently had an amazing time working with NYX electronic drone choir who really embody this new spirit of openness and creativity and are taking it into more mainstream arenas. I hope that in future this will filter through even more to the gatekeepers, the agents, labels and bookers, to give more emphasis on creating a legacy and crediting audiences with the spirit of openness to explore new music, rather than focusing on formulas and known quantities that stay safe.

Listen to NYX EDC’s latest release ‘Void‘, they’re amazing. Another group that embody this awesome spirit in the face of adversity is Jenny Moore‘s F* Choir, who I had the pleasure of teaching a workshop to after meeting Jenny when we performed on BBC Radio 3 Late Junction together. Her Mystic Business project is really uplifting too, I love her lyrics. And if you need to dance it out go listen to Map 71. I gave Lisa some vocal coaching to get her spoken word rising above Andy’s driving drums and synths, they’re really cathartic and there’s nothing else out there like them.

What’s next for you? Have you got any exciting projects on the horizon?

I’m really interested in creating work that exists in different formats to be accessible simultaneously in different ways, for example Taut was a performance, book, live album and exhibition. I’m currently releasing Dulme, a series of sounds, scenes and self-soothing sculptures for seasonal adjustment disorder, roughly based on the 5 element theory of Traditional Chinese Medicine. Dulme is a series of 5 releases representing each element through audio tracks, videos and hand-held objects designed to help people connect with nature. Spending time in nature is said to help seasonal adjustment disorder but it can be hard when the days are so short. Personally, I love winter so I wanted to share the beauty I find in it with others who find the winter hard through Dulme. In Danish, Dulme means to soothe and take medicine, so in other words music can be your medicine. Each release in the series is a super limited edition via my Bandcamp merch page, I’m releasing one each month during daylight saving time in the uk. So far, I released Air and Water, which will be followed by Wood, Fire and Earth.

There’s also a live EP on the way, produced by Sweet Williams’ Thomas House, and several collaborations on the way. On the horizon is a new solo album of songs which I’ll be recording in the summer, probably my most lyrically personal and musically challenging work yet.

To find out more about Ingrid and her brilliant projects visit her website: https://www.ingridplum.com