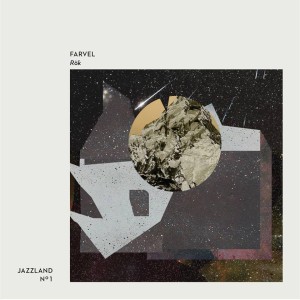 Isabel Sörling is a vocalist and improviser based in Gothenburg. She has lots of interesting projects to her name, and a wide repertoire of collaborators. Notable groups include Soil Collectors who blend Scandinavian choral traditions with American Native Indian music, and minimalist jazz outfit Farvel, who’s most recent album Rök also features a choir.

Leafcutter John is an electronic performer and composer from here in the UK. He is one fifth of the Mercury nominated band Polar Bear, and has several acclaimed solo albums. He is known for exploring unusual sound sources and making his own instruments.

On paper this looks to be a fascinating meeting of two (rather unusual) musical minds. In practice this is an extraordinary collaboration – the pair are perfectly matched, and the performance is spellbinding! Isabel has a mesmerising voice with an endless palette of colours to explore. Leafcutter John is adventurous and bold as he steers us into unchartered sonic territories. Lots of the sounds are unfamiliar and unexpected, and the improvisation is explorative and (at times) eccentric. However, the set is underlined with care and craft. Both musicians are sensitive and responsive, and in amongst the more extreme moments there is space and stillness. The performance is inventive at every turn, and the audience is presented with a vast scope of sounds and ideas.

As the set comes to a close the overwhelming feeling is one of curiosity and intrigue – how did they make those sounds, how much of it was prepared in advance, where can I hear more?

Could you talk a little bit about your background in music, and how you discovered your voice?

Isabel: I have been singing since I was really small. I grew up in a house with no interest in music but we had a piano and a guitar. I became fascinated by sound, and making noises.

Having a voice felt so natural to me that initially I didn’t think of myself as a singer. In fact, as a teenager I focused much more on the piano and guitar. It wasn’t until I was applying for music school at 18 that a friend persuaded me to audition with voice as my instrument.

It took me a while to think of myself as a vocalist, because there were lots of others who were better than me. And to be honest, it was a bit boring to be a singer in those days. It was difficult to do the long jam sessions because your voice would get tired, and it was more fun to have something to play or to hit.

For many years I had only one register to my voice. My range was limited, and that became frustrating and boring. But when I started at music school I had a fantastic singing teacher and she opened everything up. Then I had access to lots more notes, and that was really liberating – it gave me freedom to explore.

When did you start to improvise with your voice?

Isabel: Improvisation has always been interesting to me, and it feels very natural for me to be in that mode.

I remember going to the gymnasium with two friends who were totally into jazz. They made me improvise because that was cool, and that’s what they were in to. And so I tried it and it just felt right.

I then went to university in Gothenburg, and the students in my class had a love of jam sessions. Everyone was experimenting and it was a lot of fun. We played with all kinds of improvisation – tonal to non-tonal, acoustic and electric, and also jazz standards. Those early years really formed me. We were all inspired by each other and it was an exciting time.

Could you talk a little bit about this collaboration? How did it come to be, and what can we expect to hear?

Isabel: The collaboration was suggested by Dave Morecroft from Match&Fuse – it was his idea to get us together and see what would happen.

John: We had a chat on Skype before we met in person and I said I would write some material for it (just as a standby in case we needed it).

Isabel: When we first met we started improvising and exploring ideas – I tried John’s stuff and he tried some of my stuff. And that’s how it started.

John: We just played free for a couple of days. We were sounding each other out for what we liked, and it kind of clicked. It is very compatible, and I think very balanced – we both respond to each other.

I’m using this wooden box with springs on it. It has got a contact microphone so that anything I touch onto the box makes a sound. And I’m also using an instrument I’ve made which is controlled by light. I originally thought I might be processing Isabel’s voice (a bit like I do in Polar Bear), but actually she has her own pedals and her own sounds to play with, so we’re a bit more separate. She can create anything with her voice and the pedals – and it is really inspiring.

Are there any plans to take the collaboration further? Can we expect to hear anything more?

Isabel: We’ve talked about maybe doing some recording at some point.

John: I’d like to do something more with the project, and it would be nice to do some more playing. It is a bit difficult because we live in different cities, or actually different countries, so we would need an opportunity to make that happen. However, the rehearsals were really rich with ideas so I think there is plenty of potential for something more. When we initially started improvising together we both felt like we had a really strong connection. There was this sense that we never needed to negotiate or talk anything through, particularly when it came to structure, it all happened very naturally. It is quite rare to find that kind of unspoken understanding, and I think this has been a really positive collaboration.

Full credit (and a great deal of thanks) must go to Match&Fuse for some tiptop programming. As the name would suggest, Match&Fuse nurture partnerships and collaborations between different artists. The pairings can vary from full-length tours to one-off concerts, from jam sessions to residencies. Every year they curate the Match&Fuse festival where they bring together a massive mix of artists for a weekend of back-to-back new music. Match&Fuse is a forward thinking and supportive organisation, and it is fast becoming an essential and invaluable platform for musicians from all over the world.