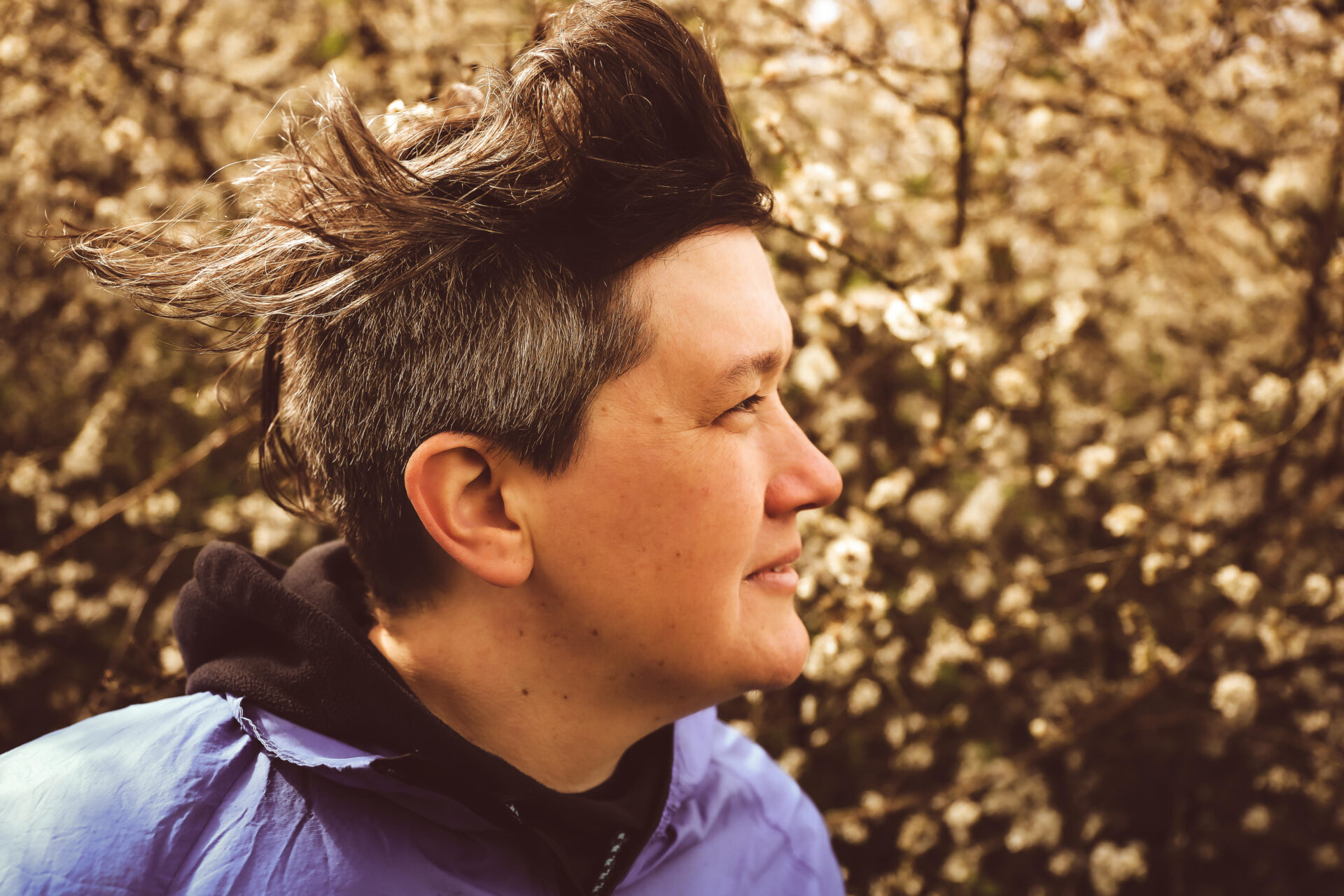 Katy Rose Bennett is a folk singer and choir leader. She’s been writing songs and making music for over 20 years, and has 6 albums to her name. During the 2021 pandemic she decided to make her first a cappella solo album. ‘Alone On A Hill’ is a striking and comforting collection of songs. The album finds the perfect balance between Katy’s intimate, lyrical songwriting and some playful, imaginative and colourful vocal textures. 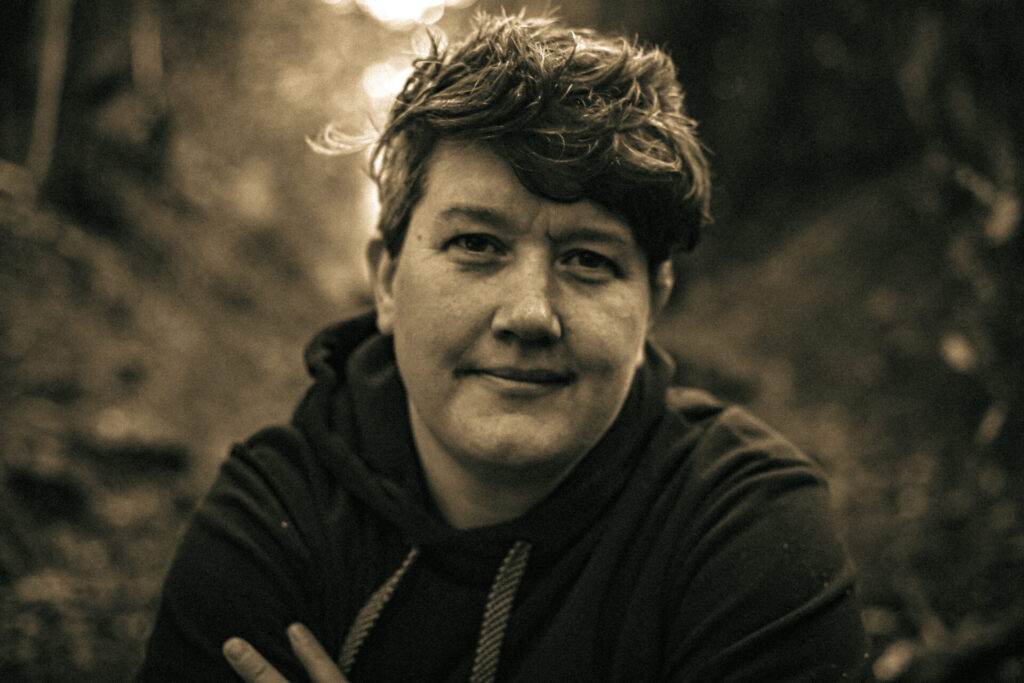 Your latest album is called Alone On A Hill, where did the title come from and what can we expect?
Alone On A Hill is how I would describe my situation during the pandemic. At the start of 2020, I moved out of central Birmingham to beyond the edge of the city to a little house on a hill surrounded by sheep, fields and a handful of neighbours. I was looking for a little peace and space after a stressful few years but once lockdown came in to force, I found myself with a lot of space and time to reflect. So that’s where the title’s from. It is also a phrase in Nowhere Man by the Beatles which has the characteristic fab 4 harmonies I grew up listening to, so it’s a little nod to them and their influence on my music.
In terms of what to expect, I guess folktronicappella is a word I made up which might give an idea! It’s a collection of new folkish songs sung entirely a cappella, with a little bit of sonic manipulation thrown in too.
What made you decide to make an acappella album?
Well, I’ve been a songwriter for over 20 years and I’ve been an a cappella community choir leader for 15 but, somehow I’d never really combined the two skills until 2020 when I suddenly had a LOT of time on my hands. I couldn’t meet my choir in person so I started creating split-screen a cappella videos of songs from our repertoire to share with the group. And then I received a little bit of funding from a great organisation called Unlimited, which supports disabled artists, to experiment making original a cappella vocal music which is where it all started really. I then managed to get a grant from the Arts Council of England to dive deeper in to this type of work, which the album is a direct result of (for which I’m incredibly grateful!)
How did you find the process of writing and recording just with your voice?
Strangely liberating. Once I’d set myself quite strict parameters – in that everything had to be made my by voice and there couldn’t be other instruments – I found myself just playing around a lot, layering up lots of ideas and seeing what worked – and what didn’t. It was a really creative and focused time – the first 3-4 months of 2021. Everything was still quite strange and we were locked-down again, so I was very grateful to be able to cocoon myself in my (very basic but sufficient) home studio and play with my voice and create. I am very grateful I had that opportunity. 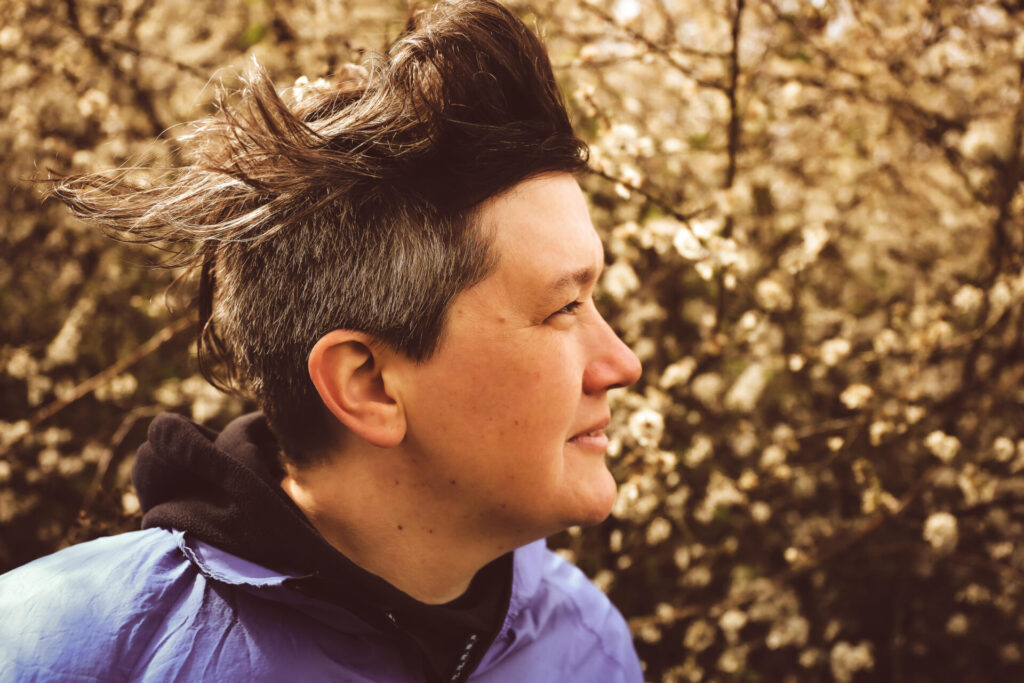 Are there any inspirations behind the album?

Many. A lot of the songs are inspired by living where I live – on a hill, surrounded by a lot of wildlife and natural space. There’s a bit of a micro-climate where I am; it gets very cold, very windy and is very exposed to the elements. I love feeling the weather so directly. So there’s lots of reference to nature, birds, trees, the weather, trying to grow veg (semi-successfully) and the environment where I live. There are some songs inspired by poor mental health and insomnia, and others which are more nostalgic and reflective.
What do you want people to take away from Alone On A Hill?
Oh, I don’t know. An emotional response of some kind? A resonance with something in the music and the themes, maybe? I released the album when I did because it was very much drawing on my experience of the pandemic, and therefore the songs are of their time and I felt I didn’t want to sit on them – I just wanted to get them out in to the world.
One thing I hope is that it will give listeners a sense of some different ways you can use your voice to create song – as accompaniment and at the forefront. For me, that was one of the things I loved in the process – just seeing what happened as I experimented.
You’re also a choir leader – what inspired your interest in vocal music and singing?
I’ve always sung. I’m from a singing family. It was just something we did and I always thought that everyone’s family sung all the time, but apparently not! We listened to a lot of The Beatles, The Beach Boys, Simon & Garfunkel, The Band, which are all so rich in vocal harmony that I find it very hard to sing songs with my friends without adding harmonies (which I’m told can be annoying)!
Later, at university, I studied medieval voice with Vivien Ellis and Moira Smiley and started exploring Georgian Polyphony and folk more widely, as well as listening The Be Good Tanyas, Bobby McFerrin, Björk and Gillian Welch – so all of those influences shaped my interest in voice too.
Fresh out of Uni, I joined a NVN community choir led by Jackie Roxborough in Birmingham which I loved and later Jackie invited me to run a singing class at the MAC in Birmingham. That led me to running the choirs and workshops I lead to this day so I’m forever grateful to Jackie for introducing me to the Natural Voice method. Jackie sadly passed away just over a month ago and I don’t think I had ever told her how much she’d influenced my work. She was a really wonderful, gentle teacher.
How did you first find your voice?
Growing up with 3 brothers!
One of my first solo vocal performances was aged 9 or 10 playing Snow White in a hilarious play written by my brother Robin in which I had to sing ‘Take Another Little Piece Of My Heart‘. I have loved that song ever since!
What are you listening to at the moment? Have you got any good recommendations?
I’ve been listening to the Voces8 album ‘Lux’, expecially their rendition of Ben Folds’ ‘The Luckiest‘ because it’s just an exquisite arrangement of a beautiful song – and it helps me have a good cry if I need it! I’ve also been listening to Juliana Barwick‘s ‘Healing Is A Miracle’ which is so vast and expansive sonically and there’s so many details and layers that there’s always more to hear with each listen. And I have absolutely no shame in saying I’ve been listening to the Encanto soundtrack with my son a lot in recent weeks – Lin-Manuel Miranda! What a musical genius!
What’s next? Have you got any exciting projects on the horizon?
Yeah – pretty busy at the moment. Here’s three things I’m excited about…

Alone On A Hill is out now. Find out more about Katy, her music and her live shows on her official website.