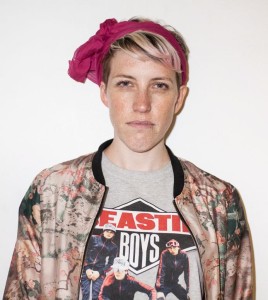 Kerry Andrew is a composer and a vocalist. She is one third of the experimental vocal trio Juice. She also has a contemporary alt-folk project called You Are Wolf.

I think my main thing would be an unusual look at the voice. Almost all of my music explores vocals and words, and I have a real love of storytelling.

More recently I have also developed a love of music that is accessible. That doesn’t necessarily mean that the music is easy to listen to, but more that it invites access. This could be something that is collaborative with members of the community, or perhaps something that can’t be completed unless it is experienced by an audience.

Could you talk a little bit about being a singer and a composer? How do the two roles relate to each other?

Most of the work I do involves writing for voices, and the way I compose is often to sing stuff straight into my computer. I don’t sing the instrumental parts, but because so much of my music is vocal it means that I do a lot of singing when I write.

It also has everything to do with words – I almost exclusively work with text. And in that respect I actually prefer to think about my role as a vocalist, rather than a singer – someone who speaks, or communicates words as well as sings them.

I always find my words first, and the music has to come from the words. That is something I talk about whenever I’m teaching, “Don’t start writing the music before you’ve got your words. It doesn’t matter how you react to them, but you will react to them somehow”.

If I’m working with a text that isn’t mine then I will spend some time with it, and get to know it. Sometimes moving things around or ripping stuff up can help me find a way in. Recently I had a lot of fun reinventing a version of The Dream Of The Rood (which is a very old English poem) and I came up with my own translation. I’m really interested in Anglo-Saxon and Norse myth, and this poem was written and shaped in a similar time. I looked at lots of old English versions and translations of the text and decided to pen my own interpretation. I’m often looking for ways in which I can be creative with the words.

I’m also comfortable writing my own words. Sometimes I will write a bit of extra text to go alongside what I’ve got. In the Derby Choral Union piece I have just finished I needed an introduction and I couldn’t find anything that was out of copyright so I wrote one myself. Another thing I like to do is to take words from community participants – I make poems out of the phrases they write, and build my own text from fragments of theirs. But I always start with the words and the music is a response.

The only time I will write for a group of voices that I don’t know is when I’m writing for a choir. But even then it is often a commission from a particular group so I can familiarise myself with their sound, or make an effort to get to know them. I suppose the furthest I’ve got from knowing exactly who I’m writing for is when I did a piece for the Landmark Trust. It had to be a very flexible, open piece for any sort of community ensemble, which included a lot of community choirs. Although I didn’t know exactly who I was writing for I did know that it would be for community groups, and that means that I’m writing for a certain ability (usually) and certain interests too.

I don’t find it confining to write for a choir. I love writing for voices – it is as simple as that. There is something quite nice about writing for a group of voices, and knowing that they will have their own sound and want to put their own stamp on it. I like a choir that has a bit of character, and I definitely want them to make it their own. I try not to have a specific idea of how it needs to sound, and whenever I hear my music performed I’m usually pleasantly surprised.

When it comes to writing for Juice then I think the challenge is to write something that plays to our strengths but also pushes us forwards. We are devising a lot of new material at the moment for a project with MaJiKer, and we’re finding that it is easy for us to write things that we know we do well. It has been great to have an external influence, like MaJiKer, to push us a bit further. Matthew has an app on his phone which is essentially a decision-maker, but he has customised it to get himself working more creatively, and got us to try it too. It is a ‘spin the wheel’ idea which will send you in a certain direction if you get stuck on something. He has personalised it to come up with actions like: ‘twice as fast’ or ‘throat singing or ‘surprising note’. We’ve enjoyed being pushed outside of our comfort zone, and I think this approach is something we will take on ourselves. It is important to be challenged and not to fall into the same sort of sounds. Sometimes it takes someone else to give you a nudge, which is why it is good to collaborate.

I tend to be inspired by musicians who have a strong character and a strong identity, but are willing to change, explore and collaborate. The most obvious examples would be Björk and Laurie Anderson – bold, striking, (as it happens) female artists. They are constantly evolving, and putting on work which is multi-faceted and multi-genre. I find Laurie Anderson inspiring for the way that she weaves spoken-word and story-telling alongside conceptual art, theatre and music. I also think someone like Damon Albarn is fantastic because he has come from a particular place but he is constantly exploring. I like people who don’t stick to one thing.

As a vocalist I think Camille is really inspiring. She is so versatile – she can sound like a child or an opera singer, a pop singer or a gospel singer. She has such a flexible voice and I admire her ambition. Seeing Camille perform live in Hackney was a real moment for me. It was beautiful and simple, but also theatrical and impressive.

I also want to include MaJiKer (Matthew Ker). He is inspiring on a musical level, and on a practical level because he has such good ideas about how an artist can be successful (and that doesn’t necessarily mean in a commercial sense, but in an emotional and well-being kind of way).

Last but not least, it has to be Meredith Monk. I was introduced to the work of Meredith Monk by one of my lecturers at University and it was a real light-bulb moment for me. It set me off on a particular path and she has stayed with me all this time. I feel like she has influenced many of the people I’ve just mentioned too.

I think it is the same as contemporary music generally, where boundaries are becoming more permeable. Different musical genres are blending together. I’m certainly interested in writing music that might feel experimental, but also have elements of folksong, and borrow ideas from different traditions around the world. I like to think that now, more than ever, composers and vocalists are exploring music that isn’t boxed into one genre. That isn’t happening across the board and much of contemporary opera is still stuck in one style, when it doesn’t need to be. I find it baffling (and a bit frustrating) that composers are still writing for a certain type of singer with a specific sound. But, thankfully, there are also lots of composers, like Jocelyn Pook for example, who want to work with a mix of voices – some of them might be conventionally operatic, but some of them might not – and that definitely interests me more.

I’d love to be creating more work that has real meaning. And that’s the sort of thing that hopefully I will be able to do once I start to have a bit more control over commissions. Sometimes commissions are just great jobs, and you can’t always have a political stance or something to say.

Just by being myself as I move forwards in my career I’d like to think that it might inspire other people who have similar ambitions. I don’t want to seem lofty or anything like that, but it would be nice if becoming a composer, or working in music, seemed like a real possibility to others (particularly young girls) as a result.

What are you listening to at the moment, and have you got any good recommendations?

Recently I’ve been listening to an Australian singer called Courtney Barnett. I would also recommend the new album from fellow folkie Sam Lee. And I’ve just discovered this amazing album called New Music For Electronic and Recorded Media – Women in Electronic Music 1977 – it features music by people like Laurie Anderson and Pauline Oliveros. Lastly, I’m waiting on an album from a friend of mine called David Breslin. He is a beautiful singer-songwriter and, although the CD hasn’t arrived yet, I know it will be good.