London Contemporary Voices (LCV) have an impressive catalogue of collaborators. The choir have racked up some serious online statistics with their viral videos and performances, and people are queuing round the block to work with them. LCV do things a little bit differently to lots of other groups and are reaping the rewards. Recent collaborations include working alongside Elbow, Laura Mvula, Alt-J, Nitin Sawhney, Basement Jaxx and Imogen Heap.

Anil Kamalagharan AKA Anil Sebastian is, together with Didier Rochard, one of founders of the choir. He is also a singer, guitarist and producer in his own right. He was kind enough to answer a few questions ahead of LCV’s big showcase at OMEARA. More about that later… 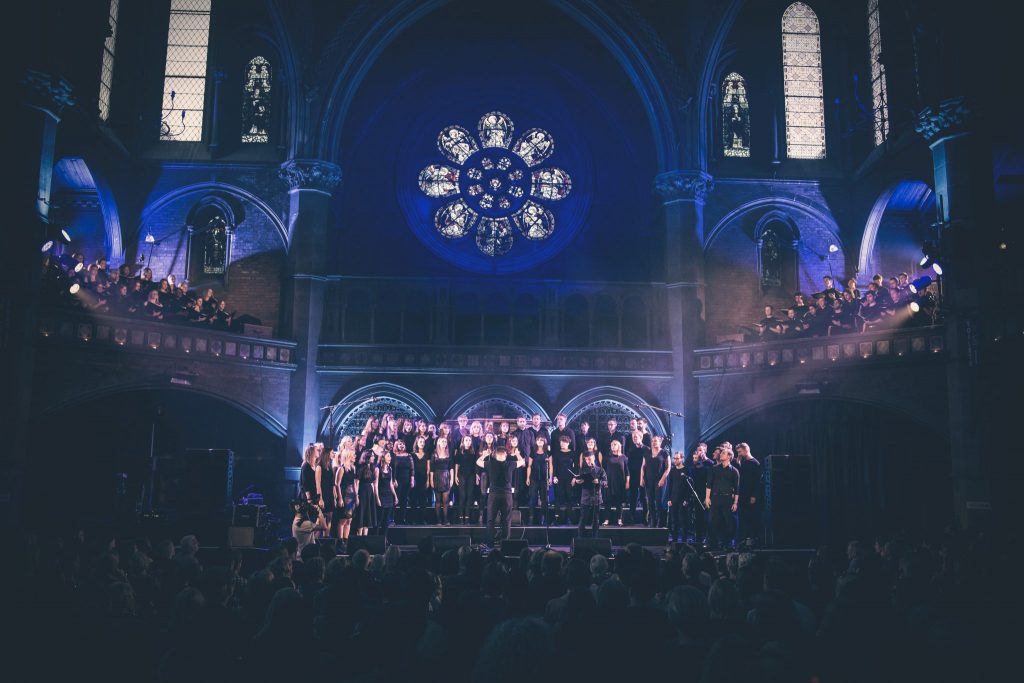 Could you talk a little bit about how the choir came to be?

The choir first formed because of an Imogen Heap concert. I used to play guitar for Imogen and I’d always been interested in her sound, especially some of the vocal elements. Imogen was doing a show at the Royal Albert Hall and Didier and I wanted to get involved. She had an idea to get lots of her collaborators together and form a choir to take part in the show. After phoning round loads of her friends and colleagues we had to broaden the search a little bit and recruit some other singers. Eventually we ended up with a 40 piece choir, and that’s how it all started. The next challenge was to keep it going!

Do you have a background in choirs?

Both Didier and I came into music through a non-traditional route. Although we’d sung in choirs before, we were new to directing one – and in a way that has helped. It means that there is an excitement and an intrigue about the whole experience. We are discovering this world for the first time and that makes it feel special – it also means we can do things differently. There is also an element of learning all together – the choir is collaborative and there is room for us to learn from our singers as well as the other way round. I think it is really important to always be learning on the job.

What do you think makes the choir different from other groups? What gives the choir its identity?

I think the diversity of voices within the group make us different. We’ve got a massive mix of members which gives the LCV sound an unusual colour. Some of our singers are choral scholars from Oxbridge who’ve done the whole cathedral thing and found their way to us. We’ve got jazz singers, folk singers and solo artists who sing with their own style. We also have members who have amazing voices but no previous formal training. The challenge is to bring all of these voices together and achieve a unique homogenous sound. We’re no different to any other choir in that respect, but I don’t think many other choirs have such a mix of different vocal colours to manage. I think it plays to our strength, and the sound we make can be quite distinctive and unusual as a result.

Another thing we do, which I think influences our overall sound, is celebrate the human voice first and foremost. We like to explore, and we like to embrace different vocal qualities. Some of our members are experienced beatboxers and we’ve done a lot of work with vocal percussionists. Beatfox is a regular collaborator, but we’ve also worked with Shlomo and Reeps One. We’re interested in taking the human voice in new directions, and part of that is embracing the full range of vocal abilities within the group. Everyone has something different to bring to the table and we want to see where that takes us.

What’s your role within the choir?

I direct and manage the group with Didier Rochard. I produce some of the recording sessions, and I sing in the choir – and that’s what it is all about! It is important to recognise where you can be most useful. I suck at conducting and I wanted to sing, so when we started the choir we reached out and found Paul Burke who is an amazing conductor. Our Thursday choir is conducted by David Corck-Adelman. Often when we work with smaller groups, we are un-conducted.

We take on a high volume of work and a mix of different projects so we need lots of people and different skills to help make that happen. We have a big team, and that’s been really important in the running of the choir. There’s no way that one person could take responsibility for all of it. In a way that’s the attitude that the choir is founded on, we’ve tried to build a collaborative sense of community. We want to be shaped from the inside, and there is always room for people to get involved.

What do you look for in your singers?

We don’t have a blueprint. What we need is always changing, and sometimes you don’t know what you need until it comes along. We like being surprised, and we are always open to the unexpected. If someone auditions with an amazing voice or an interesting sound we would hate to turn them away because they didn’t fit within a specific criteria. We like good voices and it is as simple as that!

All of our singers are auditioned, so we get a feel for their sound, range and style. We now have two choirs, on a Wednesday night and a Thursday, which means we can sort our singers into two strands. Thursday night is generally for people who don’t read music, and the Wednesday night is our original group. The second choir only started last year, but already it is taking on professional level work. More of our projects and concerts are joint with both groups, and we try not to draw a distinction between the two.

How do you choose the music, and what inspires the musical direction of the group?

Some of it is tied to specific projects we take on. I guess that’s because the choir started as part of a one-off project with Imogen Heap. The origins of the whole thing are rooted in a respected left-field artist who does a lot of project-based work, and so that has become central to what we do. As a result a lot of the music we perform is collaborative, and we enjoy working with other artists.

When we do our own concerts we tend to start with a theme, and then chose music which suits. Our last show was called ‘Guilty Pleasures’. We had spent a lot of time working on some high-profile and serious projects and so, as a way to unwind, we decided to put together a programme of less serious songs and guilty pleasures. It was a lot of fun!

We also listen to our singers and take suggestions. We’ve got lots of incredible musicians in the choir and our members have got some great repertoire ideas. We like to keep it in-house when we can. All of our arrangements are done from within the group, a majority of them by in-house arranger Knut Olav Rygnestad, and it makes a really big difference. We want to make the most of the talent we have and encourage people to get involved.

Our next concert, Beneath the Tracks, is driven by the artists within the group. We’re putting on an event which showcases what they do, and gives them a platform. It will be a really nice chance for us to support our own musicians and make the most of the amazing talent we have within the choir. 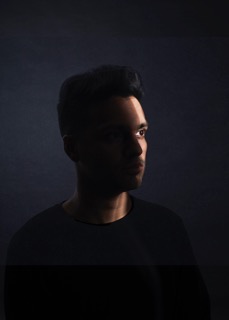 You’re also a solo artist, how does your involvement with the choir influence your own work?

It is a strange one. My work is definitely influenced by the choir, but at the same time I try and keep it separate. It is so helpful to be surrounded by amazing artists and musicians when you’re working on your own projects. I find it inspiring, but also on a practical level it is great to have so many people to bounce ideas off. I’ve also really appreciated the sense of community within the choir, and that feeling of support. I suppose the flip-side is that I want my music to have an identity of its own. LCV feature on three tracks on the album, but most of it is just me!

Being an artist in London is hard. There’s a lot of competition, and it can be a bit isolating. More and more it feels like LCV is a community in itself, and I’m really grateful to have that network of support. It is a caring and encouraging space, and I think it helps to deal with the mental health issues that sometimes come with being a musician. It is a place to share anxieties with people who are in a similar situation, but also share opportunities and build collaborations.

Does the choir still have much involvement with Imogen Heap?

Yes! – our last project with Imogen was singing some of the music for the Harry Potter ‘The Cursed Child‘ stage play. She asked us to record a special version of one of her songs in a beautiful old church in Dalston, and we had a great time together. I think it is a relationship that will keep moving into new areas. We’ve worked with her so many times over the years, and she’s a really big part of our development. She quite often comes to our concerts, and she sang with us at our show two years ago. She’s part of our history, and there’s a really nice story to be shared.

What’s next? Are there any exciting projects coming up?

Our next big concert is on Monday 8th May at OMEARA. We’re curating an intimate show called Beneath the Tracks which includes lots of collaborations with artists from the choir. I’m performing some numbers, you will also hear sets from Connor Roff, LVNA, Kate Westall and our special guest Stu Larsen. Each artist set will include an a cappella song, and an immersive surround performance by the choir. It is going to be a really great night!

A bit further down the line we are doing another show at the Union Chapel on 10th June. We will be singing with Stet and a few other guest artists. I can’t say too much at this stage, but we will have lots more details to be announced soon.

As far as my own projects go I am in the middle of recording my second album, I’ve also been collaborating with Björk-producer Guy Sigsworth on his first solo record which is really exciting. I’ve also been working with an amazing harpist called Glenda Allaway, who will be joining me at the OMEARA show. 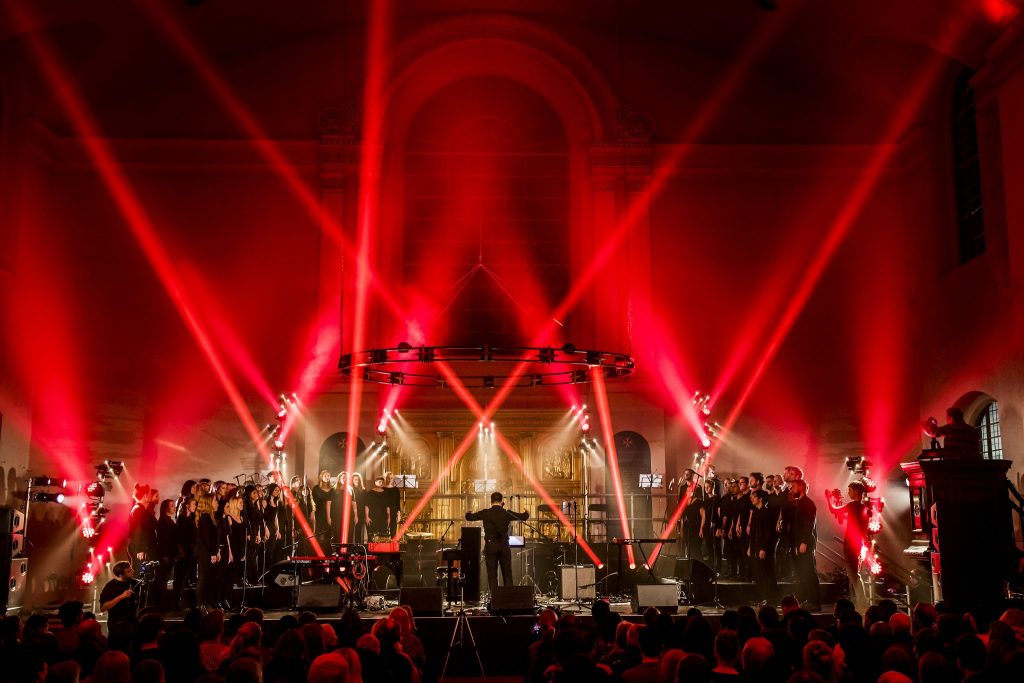 Many thanks to Anil and London Contemporary Voices. You can find out more about the choir and their exciting schedule on their website. LCV can also be found on Facebook, Twitter, Instagram and YouTube. Don’t miss their next show at OMEARA – Monday 8th May – tickets available here.