Strange Boy is a new songwriting project from Kieran Brunt and Matt Huxley. The London-based duo’s music spans lush techno production, grand biblical references and rose-tinted adolescent recollections — often in the course of one song. Brunt sings the vocals and writes the lyrics, and Huxley crafts the productions to enclose them. The pair first started making music together in 2016. Previously, Brunt had sung in choirs, written dissertations on Ariel Pink and planned to be a professional opera singer. He then started working as a music teacher, leaving classical music and choral singing behind him. A two-sided education marked Huxley’s first steps into music, studying composition by day and tinkering with dance music production by night.

The idea for the project was mooted by Brunt, who wanted a collaborator to explore lyrical songwriting in ways that challenged expectations. Strange Boy released their debut Annunciation EP in November 2017, to be followed by the Suburbia EP in June 2018, and they’ve been turning heads ever since.

The duo have a headline show at Archspace in East London on 7th August – join them! 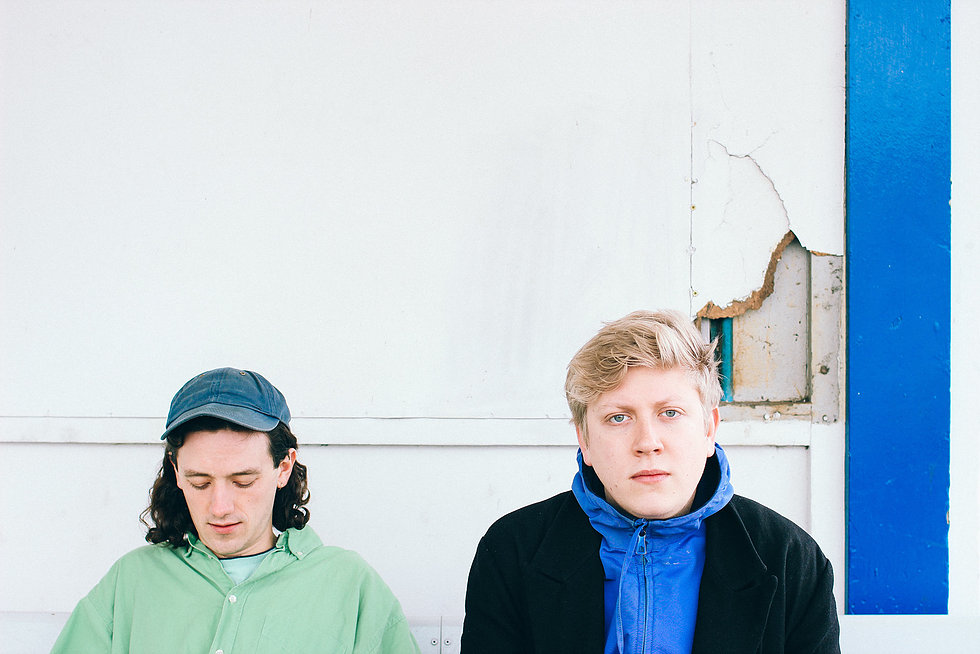 How would you describe the Strange Boy sound?

This is a question I’m so bad at answering! I think the most concise answer I have is that: we make songs with experimental electronic textures. If I had to describe it more I’d say that there’s lots of storytelling in our music, and as such the vocals are in the foreground. We like to use the violin quite a lot too, either live or sampled.

What are the main inspirations behind Strange Boy?

I think it’s about marrying our love of electronic music with the tradition of songwriting. In terms of sonic influences there’s too many to mention… but I think for this new Suburbia EP we definitely made an effort to incorporate darker, techno influences.

Do you find that being a ‘trained’ singer has an impact on the kind of music you write and perform? In your experience does vocal training point you in a certain direction, or does it open your musical landscape to more possibilities?

It’s funny because I feel like I’ve really had to unlearn things for singing in Strange Boy. Having sung in choirs and done solo song repertoire I realised that we develop very strong mannerisms which don’t really make sense elsewhere. I think the big ones for me were exaggerated phrasing (which sounds great when a whole choir does it) and over-the-top diction (ditto!). In the world of bands that sort of vocal performance can come across as a little too theatrical.

I haven’t had a singing lesson for a few years now, and it’s quite interesting seeing how far I can stretch my voice in different directions. I try to use all parts of the voice in my music, and think I have quite good control over it thanks to my singing lessons in the past. Having a microphone changes everything, and I love celebrating the real up-close aspects of singing which can’t be heard in unamplified performances.

You lead the new vocal ensemble Shards – how did that come to be? Is there anything on the horizon for Shards?

Shards is such a fun project which I ended up doing by accident, really. I had helped out on a project at the Barbican with Terry Riley, which involved conducting and working with young boys’ voices. Chris Sharp (who does the contemporary music planning) then called me six months later to ask if I’d get together a group of singers for some shows with Nils Frahm, Anna von Hausswolff and Wildbirds and Peacedrums. I was really lucky. Pretty much every singer I wanted was up for it, and still is!

We’ve been involved in three albums this year, Nils Frahm’s All Melody, Michael Price’s Tender Symmetry and Masayoshi Fujita’s Book of Life. We’ve also recorded our debut album, Find Sound, which I’m half-through producing now. It’s a collection of fresh, minimal pieces that blend voices with synths and drums and will be out in Spring 2019.

I’m very into serpentwithfeet’s new record, which has some really cool vocal moments which are heavily influenced by gospel music. I’m also having a bit of a Joanna Newsom moment, rediscovering some of the songs which I don’t know so well from earlier in her career. That’s a really fascinating voice, I think.

You’ve released an EP and lots of singles, are there any plans for a full album?

No yet! I think we want to do a little more exploring before we tackle the debut album. I’m currently writing our next EP, which will be a bit longer and feature some collaboration with our friend Nico Muhly, which will be lots of fun.

I think it seems to be doing so well, and particularly developing its own identity outside of church music. A cappella singing seems to becoming really popular and there’s all sorts of vocal ensembles popping up. I think Caroline Shaw’s Partita for 8 Voices marked a real moment in secular vocal music recently.

What’s next for Strange Boy? Have you got anything exciting coming up?

Yes! We have a gig at Archspace in London next week on Tuesday 7th August. We have a new light show and will be joined by a guest vocalist, Fiona from the band Woman’s Hour. There are some tickets left still, come join us!